We are looking for a family where our 14 year old son, who attends Yeshiva in Monsey, can board. For more information please call Chaya at 905 886-6527.
No comments:

As Itamar Yeger was driving to the Be'er Sheva fire station Jan. 15 to begin his assignment there, three rockets struck the Israeli city. Yeger, 39, a Hillcrest firefighter, rerouted toward one of the impact areas and found a rocket had landed on a car, denting its roof in by more than a foot and charring the vehicle.
Israeli firefighters already were on scene putting out the blaze, and ambulance workers were tending to three or four wounded people, including a 7-year-old boy with a severe head injury and a woman constantly screaming. Yeger said he jumped in, helping out however he could.
"It's obviously very difficult. It brought home to me that this was not a vacation and the people here are going through a lot," Yeger said by phone Tuesday night while in Jerusalem visiting family.
Yeger, an executive assistant district attorney for Rockland County, was one of eight Orthodox Jewish volunteer firefighters from Ramapo who went to Israel last week to assist Israeli firefighters during the recent war.
Most of the group are to return to the United States today, and the rest are expected to come back next week.
Continue article here.
No comments:

A large group of RCC students, led by director of the Hillel Center for Jewish Life at RCC, Rabbi Dov Oliver, just returned from an inspirational ten-day Mayanot Taglit-Birthright Israel to Israel. The trip departed during the recent Israeli operations in Gaza and although some in the group were anxious about traveling to Israel at this particular time they returned thrilled about their choice to go.

"I never could have imagined that you could spend ten such deep and rich days with a group of acquaintances and strangers and finish those ten days feeling like they are all your family, only the holiness of Israel can achieve that. It has touched me deeply and I know that from now on my Jewish identity and commitment to Judaism will stay strong despite my secular and irreligious environment." reflected Laura Cicona of Haverstraw. 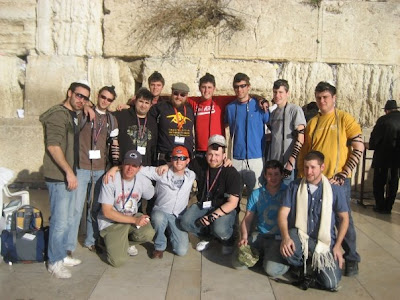 Members of the group putting on Tefillin at the Western Wall. 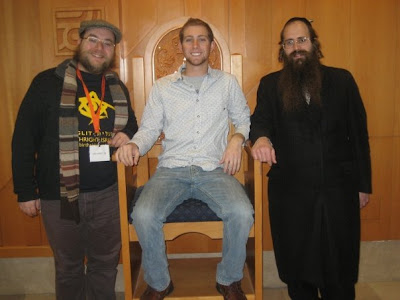 David Carr, seated in Eliyohu's chair after his 'retroactive Bris', with the Mohel and group leader, Rabbi Dov Oliver. 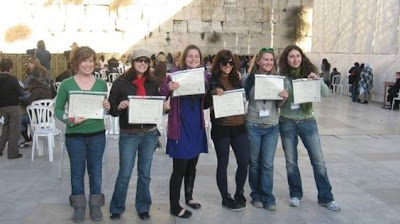 Girls from the group who received their official Jewish names after a Torah reading and special celebration.
No comments:

Yossi and Sara Touger will be making a Shalom Zachor for their newborn son this Friday night at the Kagan home, 5 West Fessler Drive.
No comments: