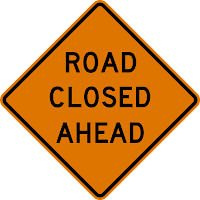 SPRING VALLEY - It was in July 2004 when The Watcher visited folks on Morris Road, Francis Place and Stonehouse Drive.

They were upset over caravans of cars, trucks and buses racing through their development to bypass a closed bridge on Union Road.

Now, 4 1/2 years later, it appears that not much has changed.

The 20-foot-long bridge was closed again - a temporary structure had been installed for about three years - and traffic was still an issue.

Pedestrians were seen one afternoon this week dodging a near-constant stream of traffic, mostly school buses snaking around the Union Road barricade.

Whenever a break in the vehicular Conga line appeared, horns honked as other residents attempted to exit their driveways.

The word "harried" might best describe life there today.

A new feature, or at least one different from 2004, was a second detour posted at Union Road's intersection with Maple Avenue.

It directed motorists away from the closed bridge and onto Route 45.

From there, drivers were sent north to Eckerson Road, where signs pointed them west to Union Road.

The circle from one side of the closed bridge to the other encompassed about 2 1/2 miles.

"I just thought it was very odd," White said. "It seemed strange that when there's a shorter way available, that they'd send people all the way around."

From White's perspective, the detour contributed to heavier traffic on Route 45, which on the best of days is often bumper-to-bumper between Spring Valley and Hillcrest.

Charles "Skip" Vezzetti, the county's commissioner of highways, said the intent was to get more commercial traffic onto the main road.

"It was my understanding that the idea was to not have all of this traffic going through the residential area," he said yesterday.

Whether that was accomplished might be debated on the three blocks straddling the closed bridge.

But whether the detour was long or short, a question remained: how long will these detours persist?

A bit of background: The houses were built in the 1960s upon what was a swamp, now fashionably called a wetland.

Long and heavy rains drenched yards, driveways and basements with water that appeared to come from the Pascack Brook.

The county traced the flooding to the village's clogged storm drains and pipes running between the streets and the creek.

When the creek rose, water backed up in the pipes and caused the flooding, Vezzetti said.

It was also found that the bridge obstructed the flow of the Pascack, a county waterway.

Rockland is spending about $1.2 million to replace the bridge, which has been closed since August. It's to be done by summer.

Spring Valley will then spend about $800,000 to install new piping to direct rainwater eastward to the creek.

"The water will then flow with the natural grade of the land," Vezzetti said.

In part, the project has been delayed by the two-year process of the village's securing easements for the bridge replacement, and performing an environmental review of the project.

A third portion of the plan - enclosing part of the Pascack - has been put on hold. The county wants to see if only the new pipes and bridge relieve the flooding.

There's a new threat, though, that worries Mayor George Darden. It's Ramapo's plan to build affordable housing on property, including wetlands, a block south of the flood zone.

"We have to work with the town of Ramapo," Darden said. "I'm going to insist that this project has to be zero runoff."
No comments:

My father proclaimed at a farbrengen: Just as wearing tefillin every day is a Mitzva commanded by the Torah to every individual regardless of his standing in Torah, whether deeply learned or simple, so too is it an absolute duty for every person to spend a half hour every day thinking about the Torah-education of children, and to do everything in his power - and beyond his power - to inspire children to follow the path along which they are being guided.
No comments: