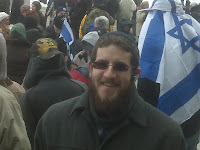 At the foot of the Rockland County Courthouse steps, several hundred people came out yesterday morning in the biting cold, waving small Israeli flags and singing prayers for peace during an Israel solidarity rally.

Despite a snowstorm the night before, they arrived in large numbers, bundled for the weather, wearing stickers that read "I love Israel" on their coats. People in the crowd held up signs, among them were "Disarm Hamas!" and "Rockland stands with Sderot" - an Israeli town commonly targeted for rocket attacks.

Yesterday's rally, organized by the Jewish Federation of Rockland County, included prayers for the state of Israel and its soldiers, and a prayer for peace.
No comments: