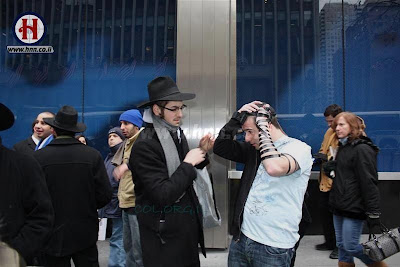 Ruvi Litzman doing Mivtzoim at the Rally in Manhattan in support of Israel.
No comments:

By Randi Weiner and Jenna Carlesso, The Journal News

East Ramapo may close two schools next year and lease them under a proposal made last night by Schools Superintendent Ira Oustatcher.

At a board meeting that drew dozens of people to the district's administration building, Oustatcher modified his Dec. 4 proposal to close Lime Kiln school and use the savings to fund several educational initiatives, including full-day kindergarten.

He said he now recommends that the district close two schools - Lime Kiln and Hempstead elementary schools - and lease them to save the district between $1.2 million and $1.4 million.

"This is going to be a near-impossible budget year," Oustatcher said. "It's with a heavy heart that I do this, but we do think it's doable.

"This is something going on in the state and the nation that impacts our financial issues," he said.

The Board of Education still needs to decide whether to approve Oustatcher's recommendations as part of the district's long-range plans, making that choice at the board's first meeting in February. Click here to continue article.
No comments: