The Center for Jewish Life at RCC together with the Indian club held a special event today Mumbai Unity Memorial - Transforming Darkness to Light.

Over 150 people attended including students, staff and community members. In addition to speeches by the college president and other officials and students there was a very moving DVD presentation made for the event. A speech was given by the student president of the Indian club whose cousin was killed in the attacks. Rabbi Dov Oliver recited Kel Moleh Rachamim which was followed by the creating of a "Kindness and Goodness" chain comprising papers with resolutions of good deeds made in honor and memory of the victims.

The event ended with a buffet of traditional Indian and Kosher foods.

Click here for the Journal News article about this event and here for some more pictures.
No comments:

This weeks Mishpacha Magazine has an article on the Mumbai Massacre written by our very own Reb Hershel Rosenbluh. 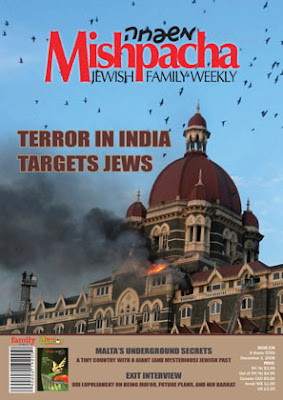 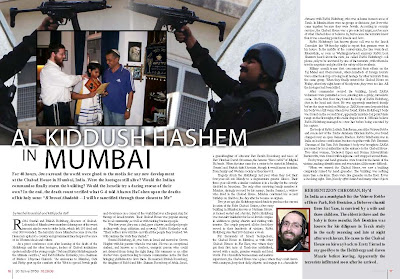 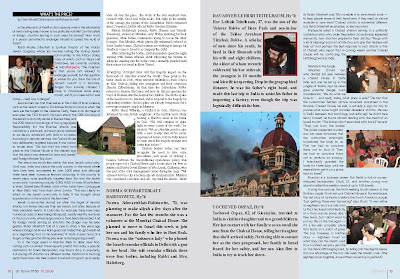 Looking for a ride for a couple on Friday from Crown Heights to Monsey and/or returning Motzei Shabbos or Sunday. Please call Chany at 845-641-1312.
No comments:

When asked how they would respond to the killing of a Chabad rabbi and his wife in a Mumbai terrorist attack, local Chabad rabbis almost uniformly invoked the same theme: light against darkness.

As Chabad houses around the world mourned the deaths of Rabbi Gavriel Holtzberg, 29, and his pregnant wife, Rivka, 28, Chabads in the Lower Hudson Valley region sought to spread light by stepping up their outreach work and planning ways to remember the couple.

The Holtzbergs, Chabad-Lubavitch emissaries, known as "shluchim," were killed Nov. 26 in coordinated terrorist attacks on 10 sites in Mumbai, India. They were among six who died in their Chabad house and 172 killed in the three-day assault.

Chabad-Lubavitch, a Hasidic Orthodox movement, has 3,500 Chabad institutions in 72 countries and seeks to bring Judaism to less observant Jews through its Chabad houses.

On the same Tuesday at the Chabad house in Suffern, Gancz's wife, Devorah, and two other local women mixed flour and braided challah, a ceremonial Sabbath bread, as part of a project that Devorah Gancz had started in memory of Rivka Holtzberg.

"From the moment that I heard that this shlucha wasn't heard from after the attacks, I somehow felt more connected to her," Devorah Gancz said earlier. "I figured that by doing this campaign, we'd be carrying on her name."

While working in the kitchen, they spoke about the Holtzberg family as the Ganczes' red-haired 19-month-old son, Mendel, scrambled around them.

Each local woman involved will prepare six challahs to give to their neighbors, family and friends, along with a bag of Sabbath candles and prayer instructions.

The hope, Devorah Gancz said, was to get a few more people affected by the project to come to the Chabad, bake their own challah and give them away, spreading the Sabbath tradition - further and further.

In honor of the couple, the six Chabads in Westchester County will host a memorial ceremony Sunday at the Young Israel of Scarsdale synagogue.

The three Rockland Chabads are also holding a Sunday memorial at the Chabad Jewish Community Center in New City.

"This is a tragedy for everybody, and we're making this community memorial service for everybody to attend," said Avremel Kotlarsky, executive director of Chabad-Lubavitch of Rockland.

"It's really an opportunity for us to unite together to express our sorrow and our grief and stand strong against the forces of evil," he said.

After living in Brooklyn and Israel, the Holtzbergs established the first Mumbai Chabad, known as Nariman House, when they came to India in 2003. Gavriel Holtzberg was an Israeli and American citizen and Rivka Holtzberg an Israeli citizen.

The couple's 2-year-old son, Moshe, survived the attack after being rescued by his Indian nanny and is now in Israel.

Local Chabad rabbis recalled that the couple had opened their home to residents and visitors for dinner every night - from the few thousand local Jews to traveling businessmen to Israeli backpackers. The couple also slaughtered and prepared kosher chickens, a rare item in Mumbai, every week for locals and travelers, and Gavriel Holtzberg performed circumcisions and presided over weddings.

In addition to local efforts, the movement's headquarters in Crown Heights, Brooklyn, is coordinating a fundraiser through Chabadindia.org to rebuild the Mumbai Chabad and care for Moshe Holtzberg.

Rabbi Motti Seligson, spokesman for the Chabad in Brooklyn, said the movement was organizing a mitzvah drive, good deeds, as well.

Although Chabad has institutions around the world, Seligson stressed that the movement did not perform missionary work. The name "Chabad" is a Hebrew acronym for "wisdom, understanding, knowledge," and Lubavitch is the Russian city that was the movement's headquarters for more than a century.

Among other plans to remember the Holtzbergs, rabbis from the Briarcliff Manor-Ossining Chabad and the Chestnut Ridge Chabad said they were working to have Jews in their communities light the Sabbath candles on Fridays in memory of the couple.

The Chestnut Ridge Chabad also plans to hold a community Sabbath dinner and dedicate its Torah ark in their honor.

About the Holtzbergs, he added: "Their influence on Jews is continuing even after they're dead."

The Associated Press contributed information to this report.
No comments: