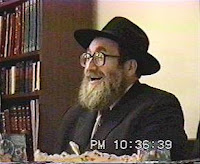 By Name Withheld By Request

It was the 26th of Tammuz. The sun was slowly sinking behind the clouds over the Old Montefiore Cemetery, the burial place of the Lubavitcher Rebbe, zt"l. I had come to commemorate the yahrzeit of my high school teacher, Rabbi Dovid Wichnin, zt"l.

I stood alone amid the rows of white, grey and black gravestones. Some stood upright, and some bent towards neighboring stones, as if seeking solace there. Silhouetted against the horizon stood the lone black outlines of isolated trees, seeming to mourn for the deceased, and beseech the Heavens for the living.

Thirty years before, I had been a sad high school girl, beset by existential turmoil and loneliness. I never forgot the only teacher that had reached out to me. He saw my vulnerability and deep pain, and showed caring and concern. He made time to speak to me and to answer my philosophical questions, which must have seemed naïve to him.

Rabbi Wichnin taught my class Shulchan Aruch. And he himself was a Shulchan Aruch of kavod ha'brios − treating people with respect and dignity.

I learned later that he himself had suffered greatly in his life. He was born in White Russia in 1938, and his family had to flee the Nazis. In the winter of 1941, his mother and sister died of starvation in Samarkand.

Rabbi Wichnin became renowned in the Torah world, where he served for 18 years as Rosh Yeshiva of Yeshiva Tiferes Bachurim in Morristown, New Jersey. Prior to that, he was a teacher at Yeshiva University High School for Girls, and principal of the New England Hebrew Day Academy in Boston.

And now, so many years later, his kindness continued to touch my heart. I traveled two hours to be at his gravesite for his yahrzeit. I took out my pocket Tehillim and said a few kapitlach and a Keil Malei Rachamim. I read the Mishnayos for a yahrzeit. I asked Hashem to remember his kindness, and to raise his neshamah to the highest illumination of the Holy Throne in the merit of the Torah he had taught me, and hundreds of others. And then, I took out the candle I had hidden in my pocket and prepared to light it.

At that moment, I realized that I had forgotten to bring matches. There was no time to run back to the main building, as the sun was quickly setting. I had only 10 minutes until the yahrzeit would be over.

As I stood in silent, tense prayer, a thin, tall girl materialized on the path alongside me. She silently passed me towards a row of graves ahead of mine, took out siddur, and started to daven.

I ran after her, with my unlit candle in hand, and anxiously asked, "Do you have any matches? I want to light this candle in honor of Rabbi Wichnin's yahrzeit."

In the midst of her prayers, she silently motioned to a square aluminum box on the ground. I opened the box, and inside was a group of candles lighting up the gleaming interior. The box was filled with lighters and matchboxes.

I lit my candle and made my way back to Rabbi Wichnin's grave, carefully shielding the flame from the wind. I had to make this trip a number of times until I was successful.

A few moments later, the mysterious girl closed her siddur and silently passed me, leaving me once more alone in the growing gloom.

What had brought this girl here? I went to look for clues at the gravesite where she had been praying. Could she have been visiting a close relative that had recently passed away? No, it was the resting place of a woman who had passed away a decade before. Could it have been the deceased woman's yahrzeit? No, she had passed way in a different season.

Was this small miracle in honor of my esteemed teacher? A nechamah (solace) for myself?

Who can understand the reasons for our experiences? We know that Hashem's Presence, permeating and surrounding us, is unseen and unfelt. In rare moments, He reveals His Presence, behind the concealing cloud.
No comments: