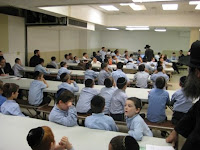 On the Sunday before Erev Rosh Hashana, the Talmidim of the Cheder were treated to a heavy dose of Chassidishkeit. They were briefed on the importance of connecting with the Rebbe before Rosh Hashana, they were taught a niggun (Oh Rebbe), they watched a video of the Rebbe and then finished the program with writing Panim. The event was arranged and coordinated by the Yeshiva Shluchim to the Cheder. Special thanks to Yisroel Silverstein for emceeing the program. 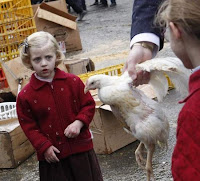 By Jane Lerner, The Journal News
Many Jewish residents will gather in a school parking lot this week to take part in an annual ritual that dates at least to 800 A.D.

The kapparot ceremony, in which a chicken is held over a person's head and moved in a circle three times before the bird is slaughtered, is for many an integral and deeply moving part of the introspection that takes place in the days before Yom Kippur, the Day of Atonement.

The ceremony was first mentioned in Jewish writings as early as 800 A.D.

The controversy over the ritual also is old. As early as the 1400s, Jewish authorities opposed the ceremony, maintaining that it was a pagan rite that had mistakenly made its way into Jewish custom. Click here to continue article.