The Vort of Faigie Meshchaninov and Elchanan Tenembaum will take place this Thursday night, September 4th, beginning at 7:30 PM, at the home of Dr. Gavriel and Sarah Tenembaum, 33 Mariner Way.
No comments:

Rebbi from Spring Valley Thanks EMT Who Saved His Life 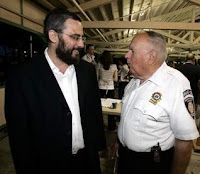 By Hoa Nguyen, The Journal News
Roland Faucher, an EMT with the Mohegan Volunteer Fire Association, last night shook hands with Jacob Klang, the man he helped save in November at the Ohr Hameir Theological Seminary in Cortlandt.

"The last time we saw him, he wasn't even talking," Faucher said of Klang, who came to the event to thank the emergency responders who saved his life.

On Nov. 7, Klang, 38, was standing in a classroom study hall when he collapsed and went into cardiac arrest. As some students called 911, others began administering cardiopulmonary resuscitation for nearly 10 minutes until Faucher and paramedics arrived to take over. The paramedics were persistent in their efforts to save him, going above and beyond what other responders would have done, Klang said.

"They were persistent and kept going," he said. "There are others who would have stopped."

Faucher said the save was a classic example of what to do in the case of cardiac arrest - namely, the importance of starting CPR immediately.

"Very seldom do we have the pleasure of such a save," he said.

Surrounded by his wife and children, Klang said he was feeling healthy and more appreciative of life.

"He did a nice job for us," Faucher said. "He came back. With a nice family like this, why wouldn't he?"

The women's kiddush is going strong! Please join us for an inspiring yet informal gathering (and kiddush buffet) immediately after davening in the upstairs beis medrash. Feel free to bring a story, an anecdote, a few Torah thoughts or a bracha to share. Or perhaps you have a guest who has something interesting to say. Listeners are welcome too! (There continues to be a women's section at the downstairs kiddush as well.)
No comments:

We now have the following new items available: Jewish Woman's Calendar, new children's book The King in the Field, Siddurim, Machzorim, Selichos. Begin getting ready for the Yomim Noraim now! Come and browse on erev Shabbos, motzai Shabbos and Sunday and daily after Ma'ariv between 9:45 and 11:00 PM. For more information please call Mrs. Abramowitz's cell at 845-558-8249.
No comments: