Sheva Brachos for the Lesches Family

A community sheva brachos is being organized in honor of Shaya and Baila Lesches, son of Rabbi and Rebbetzin Lesches. The sheva brachos will take place on Monday, July 7th at 8:00 in the evening at K’hal Tzemach Tzedek.

Everyone is invited to attend. The cost per person is $35.00. Checks can be made payable to K’hal Tzemach Tzedek and should be sent to Chana Edelkopf, 28 Fessler Drive, Spring Valley, NY 10977.

This is a wonderful opportunity for those who are not able to attend the wedding to share in this simcha.

Please reserve no later than Thursday, July 3rd, 2008 to Chana Edelkopf at emhchana@gmail.com. Please respond as soon as possible so that preparations can be made accordingly.
No comments:

We are trying to organize a bus for the wedding of Shaya Lesches. The bus would leave in the morning on July 2nd and return right after the wedding. The cost would depend on the number of riders, between $80 and $100 per person roundtrip. We would need 30 people to charter a bus. If you are interested, please email yschulman@nylag.org no later than Tuesday, June 24th.
No comments: 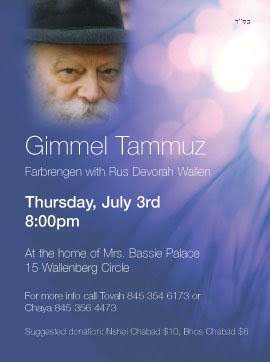 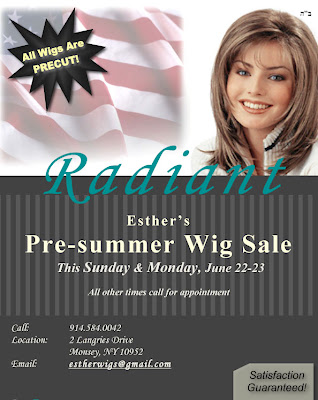 All people are invited to attend a local commemoration of the world-renowned late rebbe Menachem Mendel Schneerson. The rebbe was the seventh and last leader of the 250-year old Chabad Lubavitch movement, which continues to thrive and grow with more than 3,300 chapters in 70 countries.

With a huge body of correspondence, written works and taped messages, Schneerson continues to remain one of the most influential Jews in the world. The 14th yahrzreit of his passing, a gala tribute marked by speakers and a special address, begins at 7 p.m. July 8 at the Rockland Jewish Community Campus, 450 West Nyack Rd. in West Nyack. Dessert will be served. Admission is $18 in advance or $20 at the door.

Scheduled as the keynote speaker is Rabbi Mendel Kaplan of Thornill, Ontario. "Even after a righteous person's passing, their influence on the physical world continues and grows," noted Rabbi Yisroel Goldberg, of the Chabad JCC of New City. "Even though their soul has ascended, it doesn't mean their connection to this world has ceased." Click here to continue.
No comments:

There will be be a special Farbrengen and Siyum HaRambam in honor of Gimmel Tammuz on Sunday night, July 6, at K'hal Tzemach Tzedek at 8:30 PM. All are encouraged to participate.

The Lubavitcher Rebbe, Rabbi Menachem Mendel Schneerson of righteous memory (b. 1902) passed away in the early morning hours of the 3rd of Tammuz, of the year 5754 from creation (1994).
No comments:

Moving to Israel Sale - This Sunday

Yaakov and Chaya Esther Ort are moving to Israel and are have a sale at their home, 48 North Southgate Drive, this Sunday, June 22 from 12 Noon to 6:00 PM.

A Tribute to Rabbi Markowitz 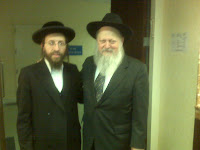 This past Sunday a there was a special lunch in Morristown in appreciation of Rabbi Zalmen Leib Markowitz’s 18 years of dedication to the Morristown Cheder. The following is a speech that was given at the lunch by Rabbi Yossel Sirota, a student of his very first class of 5750 - his first year teaching in Morristown.

18 years ago I was sitting in a classroom with my 5 classmates, waiting for my new teacher to arrive. After a few minutes, Rabbi Markowitz walked in with his long jacket, long payos and his funny hat. We took one look at him and we all burst out laughing.

I remember thinking to myself, this guy is our new teacher, there must be some mistake, I did not expect him to last to the end of the day. And I definitely could not have imagined that 18 years later I would be standing here paying tribute to a man that had such a tremendous impact in so many stages of my life.

After a moment of laughter we looked up to see his reaction, we expected a serious angry look followed by a good yelling, after all is this the proper way to welcome a new teacher? Instead he had a huge smile on his face, he was actually laughing with us, he understood that we meant no disrespect, its just that we never expected our teacher to look like that.

His level of understanding. Love and care is what made that year one that I could never forget. My training to be a teacher did not start 4 years ago when I began teaching rather 18 years ago when I experienced first hand the role a teacher plays in a child’s life.

His caring was not limited to classroom matters but also to our personal needs. I remember a day I was pacing back and forth outside during recess, frustrated about something not related to class, he noticed came over put his hand around me and asked me what’s wrong. I shared my problem with him and he promised to help me solve it, he then pinched my cheek and told me not to worry. What exactly my problem was and how it was solved I really cant remember, what stayed with me was that I had a teacher who really cared for me.

The caring did not stop when the year was over. after leaving his class he continued to guide me and help me throughout my following years in Cheder. He did not stop caring for me even after I left Morristown to learn overseas. I remember at least one occasion talking to him over the phone and getting Chizuk in the areas that I needed it. Even in the years following when I did not speak to him as often, I knew how to reach him and that he would be there for me if I needed.

What was truly amazing is that I was not his pet receiving special treatment, I watched every student being cared for with the same love and understanding. There was no such a thing as a former student. Once he got to know you, you were his forever. And so with every year that passed he had more and more students to care for, making it a true challenge to be there for everyone of us.

As teachers it is often a struggle to have to start over every year with a new group of boys. After establishing a relationship with students we are forced to let go and make room and time for the next group. Rabbi Markowitz’s level of caring did not allow him to leave go. Till today, what gives me the most pride is to be able to say not that I was his first student but that I am his longest student. 18 years and counting.

There was another time I remember laughing at him, though this time not in his face. It was when I heard he became principal of the Cheder. And again I thought to myself, him a principal, it must be a joke, after all he can’t even yell at someone without smiling. And then it hit me. His brilliance, he actually found a way to continue caring for all his students at the same time, by becoming principal.

I looked up principal in the dictionary and he does not match any of the 15 definitions that I found. who ever heard of a principal who is loved by all children, that they would rather be with him in his office than in their own classroom. A principal that is accessible to every single student and teacher anytime anywhere for anything and everything. That’s not a principal that’s a lot more, that’s someone who really cares.

And so it is my belief that his becoming principal was just in order to be on top of each and every child’s development. Not to have to let go of even one student. Such was his level of care. I’m sure that when he became principal it was a loss to his next incoming class, since now he was not going to be exclusively theirs, but somehow everyone agreed that a man with such talent needed to be shared.

18 years and hundreds of students later, he still can not leave go of the very first student of that very first year. And once again he is forced to come up with a plan how to continue caring for all of his students, and their families. Guiding them and their children in chinuch issues specifically and life’s issues in general.Just as then he left the comfort of 1 classroom to care for his students throughout the whole Cheder, now too he leaves the comfort of 1 Cheder to continue caring for his students who live and learn throughout the world. And this time I am not laughing at him. A man with such talent still needs to be shared.

And so my message to everyone here today is this: if you’re upset about having lost a principal. Don’t be, you never really had one. And if your upset about losing a man who genuinely cares for the chinuch of your child. Don’t be, you did not lose him, he will forever care.
No comments: 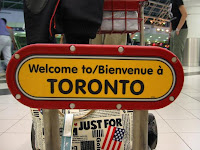 I am looking to share driving to Toronto for the Shusterman wedding and return before Shabbos. If you are interested, please contact awolowik@hotmail.com or 914-960-2888.
No comments: