A Trip to Post-Nazi Hungary 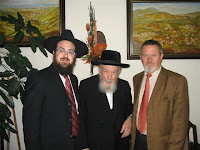 Our Sages tell us and we read in the Haggadah on Passover: B'chol dor vador... In every generation one should see himself as he has gone out of Egypt.

We recently returned from an emotional visit to Hungary, accompanied by my paternal grandfather, who was born there in 1922. Rabbi Eliezer Ehrenreich is the sole survivor of a long line of prominent rabbis. Four generations of his ancestors lived, served as rabbis and were buried in Maad.

All of my grandparents are Hungarian Jewish Holocaust survivors. I was fortunate to grow up in the same house as my grandparents. "Before the war" and "after the war" were always points of references in many a conversation. My grandparents lost 90 percent of their respective families during the Shoah; their parents, siblings, nephews, nieces, uncles, aunts, and cousins. As a young child, I always wondered why there were so many yahrtzeits on the same day. Later on, I learned that they were memorial days for those who perished - because the real dates of their deaths were not known. My grandmother, an Auschwitz survivor, who passed away in 1998, had numbers on her forearm. I vividly recall the stories I was told. The stories of trials and tribulation and those miracles and triumph.