K'hal Bais Menachem is looking for one or two teenage girls to lead the children's program on shabbos mornings in July and August from 9:45 to 11:15 AM. Please call Eli Zisman at 845-216-8007.
No comments: 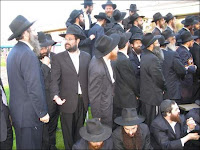 NEW CITY - Before a packed room of fellow rabbis, Avremel Kotlarsky told the audience that they had made huge strides as an organization, but that it would take far more effort to continue growing.

"There is no free ride, this does not come easily," said Kotlarsky, executive director of the Chabad Lubavitch of Rockland center.

His remarks were part of a gathering of more than 100 rabbis from across New York and New England, who came to the center yesterday for a regional conference.

The goal Kotlarsky spoke of was the central mission of the Chabad movement - to provide and expand religious experiences for Jews around the world.

The meeting was the first time that the New City center has hosted the conference in more than 15 years, or since the facility opened in the early 1990s. The building houses a day camp, a Jewish day school, a synagogue and a Hebrew school.

"I think the fact itself that we are getting together shows we have a tremendous energy," said Rabbi Yisroel Goldberg, director of community outreach and adult education at the local center.

At the conference, the rabbis discussed contemporary religious questions, ways to strengthen the Chabad organization and basic tips on fundraising, networking and growth strategies.

The Chabad movement has more than 2,000 centers around the world and holds a global conference every fall in Crown Heights, Brooklyn, where the organization is headquartered. The conference usually brings in more than 5,000 rabbis.

The movement was started about 250 years ago by Rabbi Schneur Zalman from Russia. The organization does not do missionary work or attempt to convert non-Jews.

Although the movement is considered a part of Hasidic Orthodox Judaism, Goldberg stressed the importance of not labeling it because Chabad seeks to be inclusive to all Jews.

"Our sole purpose is to bring people closer to Judaism," Goldberg said.

Rabbi Aaron Konikov from Long Island said the local conference was an important way to reinvigorate the Chabad leadership, especially rabbis who live in communities where they are the only observant Jews.

"It brings motivation and friendship and recommits us to the mission and it continues to instill in us the fact that we're in this together," Konikov said.

"I think it's a wonderful turnout," said Rabbi Moshe Kotlarsky, a representative from the Brooklyn headquarters. "It gives inspiration to each one of our shluchim (emissaries)."