Mazel tov to Eli and Miriam Zisman on the birth of a baby boy! The Shalom Zachor will take place this Friday night at their home, 14 Green Hill Lane.
1 comment:

Upcoming Events at Hillel at RCC

The Center for Jewish Life/Hillel at SUNY Rockland Community College invites members of the public to its series of free events on campus celebrating Jewish heritage. For further details, visit www.sunyrockland.edu/go/centerforjewishlife or call Rabbi Dov Oliver at 845-574-4422. 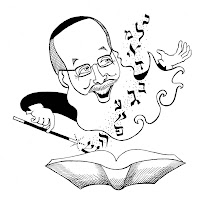 Monday, March 31, 7:15 p.m., Student Union, Rm. 3214
"Searching for G-d in a Magic Shop," by author and magician Arthur Kurzweil.
An enchanting presentation that explores the world of illusions and profound ideas of Jewish thought. This is a totally unique and entertaining magic show that is designed not to fool or trick you, but rather to teach you how to see.
Kurzweil, a member of the International Brotherhood of Magicians, is also considered America's foremost expert in Jewish genealogy and is author of the classic, "From Generation to Generation: How to Trace Your Jewish Genealogy and Family History," as well as "Kabbalah for Dummies" and "On the Road with Rabbi Steinsaltz."

Tuesday, April 1, 12:30-2:30 p.m. and 7:00 p.m., Fieldhouse Arena
Talk, basketball clinic and night game with "The Jewish Jordan," Basketball Star, Tamir Goodman.
Dubbed "The Jewish Jordan" in 1999 by Sports Illustrated, basketball star Tamir Goodman will give a motivational talk followed by a hands-on basketball clinic during the day. In the evening, he will deliver another talk at 7:00 p.m., and then get onto the court to lead the Rockland Jewish All Stars in a basketball game vs. the RCC Hawks.
Tamir, a 6' 3" shomer Shabbos Jew who sports a kippah and tzitzit while he plays, recently returned from a multi-year stint of pro basketball in Israel to play for his hometown, the Baltimore Nighthawks.

Wednesday, April 2, 12-1:30 p.m., Student Union, Rm. 3214
"Breaking through Barriers," Laughter Workshop by Esther Rachel Russell, Comedian
Esther Rachel Russell is a screenwriter, actress, producer, laughter therapist and the creator of the Comedy Improvisation Workshop, Breaking Through Barriers. Inspired by mystical Jewish teachings, this workshop of comedy and spirit is designed to break through barriers and spread joy in our lives. Laugh. Laugh. And laugh some more. Through various comedy exercises, workshop participants are infused with a dimension of joy that empowers them to lead lives of possibility, authenticity and redemption.
Esther Rachel recently starred in the acclaimed off-Broadway comedy, A Match Made in Manhattan: the Interactive Jewish Wedding Experience, and the newly released feature film, The Permeable Man. 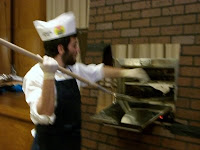 Thursday, April 3, 12:30-1:30 p.m., Student Union, Rm. 3114
Traveling Matzah Bakery
In preparation for the upcoming Passover holiday, participate hands-on in the process of making your own handmade matzah, from mixing, kneading and rolling to baking…and eating! Learn the significance of matzah and other holiday traditions.
Friday, April 4, 12:30-1:30 pm, Student Union, Rm. 3114
Create Your Own Judaica: Hands-on Art Workshop
Jewish life is enhanced by beautiful objects that honor Shabbat and holidays. Create your own heirloom traditional piece of Judaica. Materials and instruction provided, just bring your creativity!

Art Exhibit
March 31 – April 16, Library Rotunda (hours: M-Th 8 am-10 pm, Fr 8-8, Su 11-6).
"Art & Soul: Joy on Canvas," by noted Jewish artist Michoel Muchnik
Through his artwork, Michoel Muchnik has taken the brush, paint, canvas and clay and implanted within them a spiritual life force. Among the foremost Jewish artists of our day, he revolutionized Chassidic art. His imaginative and joyful depiction of traditional and mystical Jewish themes brought him critical acclaim and international prominence.
No comments: