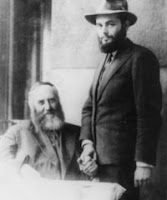 There will be a special farbrengen for men with Rabbi Lesches, in honor of Yud Shvat, the yarzeit of the Freirdiker Rebbe and the day that the Rebbe assumed leadership, this Thursday, January 17th at K'hal Tzemach Tzedek. Maariv will be at 8:15 PM followed by the farbrengen at 8:30 PM. All are encouraged to participate!

PS - In honor of his mother's Yarzeit, Yosef Shandling will be saying the Yud Shvat maamar at Maariv on Wednesday night and after Shacharis and Mincha on Thursday.
No comments: