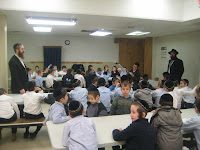 This past Sunday, Yud Kislev, the Cheder Chabad Boys School organized a farbrengen for grades 5 through 7. The farbrengen began with Rabbi Wolowik explaining to the students how the Miteller Rebbe read Tehillim Perek 55 on the day that he was redeemed. This Perek includes the Pesukim of the famous nigun Podoh B'Shlom. After singing the nigun, Rabbi Wolowik and Rabbi Shusterman farbrenged with the children, said l'chaim (on grape juice) and had some farbaisen (cupcakes). The farbrengen concluded with the children singing the Miteller Rebbe's Kapelya. It was so nice to see how well the children knew the nigunim.

Grades 1 through 5 had a separate assembly where the boys said the twelve pesukim, sang Podoh B’Sholom, heard some stories about Yud Kislev, said l’chaim and enjoyed a cupcake.